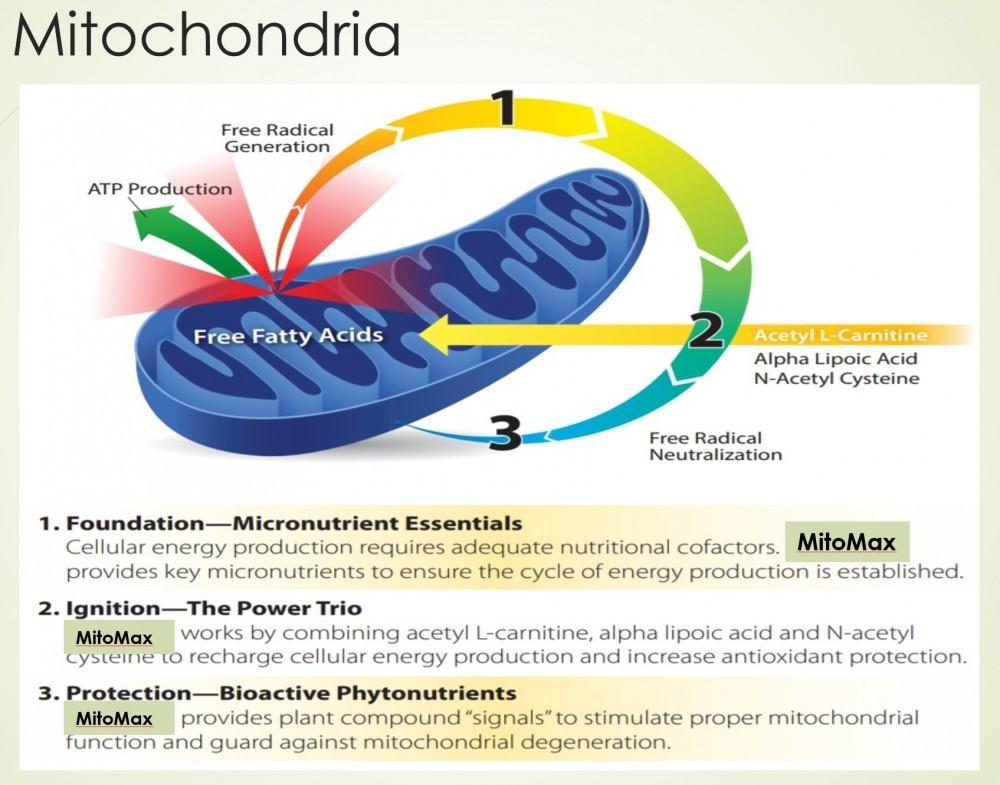 I’d like to present the mitochondrial perspective on energy and Brain fog. So I’ve recently asked you three questions. Have you been able to keep up with all the latest news? Do you find yourself forgetting what you’ve just saw, heard or read ? How often have you tried to recall something that was “just on the tip of your tongue” but that just suddenly  vanished? We talked about brain fog with the inability to concentrate or focus, having poor memory or difficulty with recall, and a loss of mental clarity. I mentioned the various causes that I’ve helped correct in the people I’ve worked with. We focused on food allergies or intolerances, a 14 day reset and detoxification program, and gave you a brief introduction on mitochondria in a cartoon last week.

So the causes of all disease is Inflammation which lead to oxidative stress, immunity dysfunction, mitochondrial damage, cell death, and then organ death.

What are the origins of these power plants that are present in almost every cell in our body? Plants have solar power plants called chloroplasts but we partnered with an ? Ancient power producing bacteria. Mitochondria make energy for us and plants as well. These are some facts about the Mitochondrial genetics. They have their own nuclear region and DNA. Their DNA are not protected as much as our DNA and any injury such as radiation, metabolic waste products like reactive oxygen species, and environmental toxins damage mitochondrial DNA first.  Our mitochondria are inherited from our mothers (via the egg, not the sperm).  Maternal health and exposure to toxins determines the baseline mitochondria we have. Genetic tracing can used to trace ancestry from the maternal branches of families.

So what are the benefits of mitochondria?

They allow us to use oxygen to generate 32 ATP energy units per molecule of glucose through the Krebs cycle.  Without mitochondria we make only 2 ATP energy units in a process called glycolysis. They regulate cell aging and a process called autophagy or the cell death pathways which is missing cancer cells. They regulate calcium levels in the cell. They participate in heat generation (thermogenesis) in brown fat. They contribute to immunity and inflammation. They play a keypart in cell survival.

Mitochondria are like metabolic engines. Combustion engines in our cars produce waste products and “excess heat/stress.” Mitochondria produce reactive Oxygen Species (ROS) or free radicals that need to be neutralized.  Superoxide (02-) is a reactive oxygen species (ROS), which is the name given to highly reactive molecules that contain oxygen, is the main source of ROS in cells. Left alone, it can cause damage like a combustions engine can have viscosity breakdown or overheat.  Fortunately superoxide can be converted to hydrogen peroxide H2O2  another ROS but is a step away from being converted by enzymes to water or H20 which is obviously safe.  If the hydrogen peroxide is not converted , a very reactive hydroxyl molecule *OH can form and can’t be eliminated by enzymes

The Mitochondrial ROS scavenging system is a powerful antioxidant defense system that searches for  ROS as they are generated.  Molecules that hunt and eliminate ROS are called ROS scavengers. Superoxide dismutase (SOD)  is an enzyme responsible for the conversion of superoxide into hydrogen peroxide. There is a cytosolic form of SOD, SOD1 or Cu/Zn-SOD (because it binds copper and zinc), but mitochondria have their own form, SOD2 or Mn-SOD (because it binds manganese).  Hydrogen peroxide (H2O2) can then be eliminated by enzymes that convert it into water (H2O).  The danger is without enzymatic conversion, hydrogen peroxide can degrade into the hydroxyl radical (*OH) which his extremely damaging

Glutathione peroxidase (GPx) is found in mitochondria and in the cytosol (the cell). It eliminates H2O2 with the assistance of the redox molecule glutathione (GSH).  Glutathione is made from 3 peptides: glutamate, cysteine, and glycine.  Cysteine is responsible for its biological activity and is the rate-limiting factor in glutathione synthesis. Cells can make more GSH if adequate amounts of these three amino acids are in the diet. Because cysteine is rate-limiting, increasing cysteine, the dietary supplement N-acetylcysteine (NAC), may boost GSH production.

Peroxiredoxins (Prx), also found in mitochondria and in the cytosol, act in a similar way to glutathione perioxidase (GPx).  They reduce hydrogen peroxide (H2O2) with the help of the redox molecule thioredoxin.  Catalase is very effective at detoxifying large amounts of hydrogen perioxide (H2O2).  It can rapidly decomposes H2O2 into water and oxygen. Catalase is found in a type of cellular organelles called peroxisomes

This disease causes problems with thinking, walking, talking, eating, breathing,-just about anything.

There are hundreds to thousands of mitochondria in a single cell.

The Network of mitochondria working together is essential for cellular well being and adaptations to behaviors linked to healthy aging like restricting calories or exercise.

The mitochondrial network within each cell is constantly adapting itself to our lifestyle and environement.

The reshaping  of mitochondrial networks is MQC

MQC monitors any damage  or environmental changes and allows the mitochondrial networks to reshape themselves to adapt to diet, lifestyle, and the environment

Another set of molecular mitochondrial quality control (MQC )processes aims at repairing and restoring the function of damaged proteins, or at replacing irreversibly damaged proteins

The protein quality control (PQC) system is made up of a set of mitochondrial chaperones and proteases, and of cytosolic proteolytic systems that reside  and are associated with the outer mitochondrial membrane

Chaperones are proteins that assist the folding of other proteins (this is needed to move proteins through cell and mitochondrial membranes).

Proteases are enzymes that break down proteins.

Chaperones like the heat shock proteins HSP22, HSP60 and HSP70 aide the  mitochondrial PQC by sorting and folding misfolded or unfolded proteins back to their native structures, and by breaking up  proteins that are stuck together inappropriately.

They are part of a damage repair system and are a critical component of countering a long recognized aging process called “Loss of Proteostasis” (or loss of protein homeostasis).

Oxidative damage of proteins can be irreversible, meaning the proteins cannot be repaired.

Irreversibly damaged proteins have an adverse affect on cellular function

Part of the  “Aging as Damage Accumulation” theory of aging

Fortunately, cells can elimate Irreversibly damaged proteins through proteolysis which is the breakdown of proteins

This is achieved through the proteolytic PQC system, where mitochondrial proteases and cytosolic proteolytic systems like the ubiquitin–proteasome system (UPS) degrade damaged or aggregated proteins.

These are then replaced by new proteins produced by de novo biosynthetic pathways.

Mitochondrial fission is the opposite of fusion. Fission generates two smaller mitochondria.

Fission is essential for mitochondrial duplication and biogenesis which is the creation of new mitochondria.  It’s also required for cell division.

Also, much like fusion, fission plays a role in damage control, because it allows for the separation of damage. Mitochondrial content can be mixed and separated, allowing the isolation of damaged molecules or structures.

Smaller mitochondria with different properties can be generated, separating the damaged from the functional

MITOCHONDRIA GET RID OF IRREVERSIBLE DAMAGE

Autophagy which means ‘self-eating’ occurs when a cell degrades and recycles its own contents, particularly damaged proteins and organelles, for cellular recycling  and homeostasis maintenance.

Aging as a process of damage accumulation is one of the main theories of aging. By cleaning up cellular debris and preventing it from accumulating, autophagy helps keep cells performing at a younger level.

Mitophagy (mitochondrial autophagy) is a specific type of autophagy that selectively degrades damaged mitochondria. It is a tightly regulated MQC process that acts at the organellar level

HOW MITOCHONDRIAL NETWORKS GET FITTER

Mitochondrial biogenesis is the generation of new mitochondrial content. It is the opposite of mitophagy.

MQC IS ESSENTIAL FOR HEALTHY AGING

Mitochondria have developed  a  set of  of interconnected processes, collectively called the mitochondrial quality control (MQC)

Its role is to minimize damage,  repair whenever possible, but get rid of damage if it becomes irreparable.

Our cells age when the MCQ can’t keep up with the amount of damage that’s being done.

At the same time, there is also a natural age-related decrease in the efficacy of antioxidant defenses and other MQC processes,

Cellular senescence accelerates and ultimately affects the the of tissues and organs. From there  high‐energy‐demanding tissues such as muscles, brain, heart, and immune system are compromised.

So to optimize  the mitochondrial quality control we need minimize environmental toxin exposures, nourish our mitochondria with appropriate micronutrients, bioactive phytonutrients, and essential molecules such as L carnitine, alpha lipoic acid, and N-acylecysteine.

Alpha-lipoic acid is a naturally occurring short chain fatty acid, serving as an important cofactor for many enzyme complexes including the mitochondrial respiratory enzymes. Is is also an antioxidant.

N-acetylcysteine (NAC), is a precursor of glutathione, is a widely used thiol-containing antioxidant and modulates the intracellular redox state. It eliminates H2O2 with the assistance of Glutathione peroxidase (GPx).

Once mitochondria are optimized with products such as Mito Max, detoxification such as the 14 day reset or detoxification program are even more effective and also repairing the GI tract and having the energy to rebalance the immune system can also take place more efficiently. Brain function and mental fatigue are restored if there are no other causative factors.

Next week, we will discuss the brain and mild cognitive decline in more detail. I hope to see you then.

So if you’d like to take advantage of the time you have sheltered at home to do the GI Reset Program please call our office to schedule a telephone or telemedicine video chat consultation.