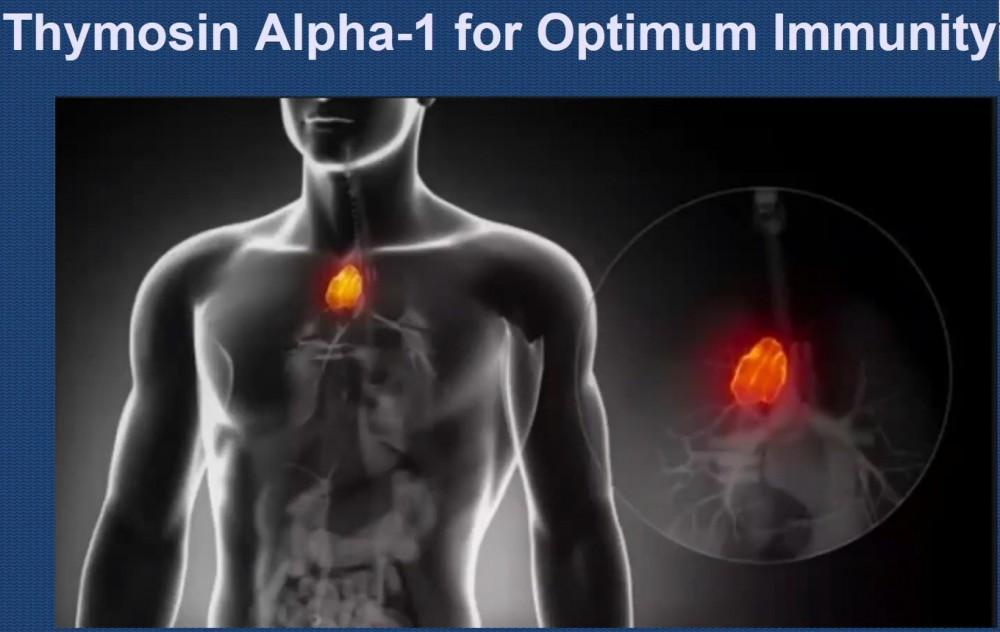 Hi, it’s Dr. Jeffrey Mark. Today I’d like to talk to you about Thymosin Alpha One peptide to optimize your immune system. Thymosin Alpha One is used to optimize your immune system and optimize immunity.   So what are peptides? Peptides are short-chain amino acids less than 50 in size and they’re found naturally in the body and are basically the same building blocks as proteins.  Particular chains of amino acids can be created and isolated to do very specific things.  These peptides bind to cells and tell the cells to do specific functions that naturally with the ability to rewrite body chemistry. They can promote restoration. and growth. They can also promote hemostasis or a steady state in the cellular matrix.  Thymosin Alpha One also has healing benefits that have been unequaled in the past.  Thymosin Alpha One is derived from the thymus gland, which is quite prominent in infancy and childhood but decreases in adulthood.  By age 80 is hardly seen and this could occur because of toxins, overuse and other stressors on the immune system over time. Thymosin alpha one, which can be abbreviated as  TA1,  helps the innate and adaptive immune response. Therefore useful in coping with infectious diseases and inflammation, both for autoimmunity and for inappropriate inflammation and cancer, to augment vaccinations, and to help with immune deficiencies. These are the list of things that the Thymosin Alpha One has been shown to benefit those that have ongoing or recurrent Epstein Barr Virus or other high viral loads. This can activate the immune system to reduce those loads.

For information on AFH Peptide therapies, antiaging or other regenerative medicine programs including our course on optimizing your immunity, email info@jeffreymarkmd.com, find us on the web at www.allfunctionalhealth.com and make an appointment,  or call (925) 736-9828. We will be discussing more peptides and their benefits in future videos.  Take care and stay healthy.